Can The SHIB Price Rally Be Sustained?

A daily closure above the immediate resistance around $0.00002710 could bolster the bulls to push SHIB price above the $0.000030 psychological level. After which the October 07 high above $0.000035 would be the next logical move.

However, if things go awry for SHIB price and drops below the immediate resistance around $0.000026, the ‘Doge-Killer’ may drop below the rising trendline to tag the $0.00002269 support wall. A fall below this point could see SHIB drop further to tag the $0.000020 psychological level.

You might be wondering, why the sudden rise on the SHIB price?

Well, Elon Musk is at it again!

The Tesla CEO tweeted a picture of his new Shiba Inu puppy with the caption “Floki Frunkpuppy.” 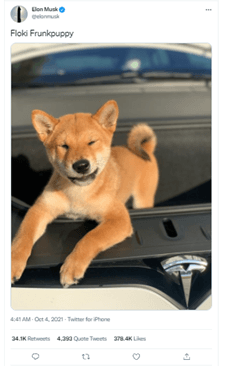 The Floki Frunkpuppy dog is the namesake of the cryptocurrency token, Shiba Inu coin. The hashtag #SHIB began to trend on social media in response.

Musk has been in the habit of Tweeting cryptic messages which have been having a domino effect on the cryptocurrency market. For example, when he tweeted that Tesla would no longer accept Bitcoin as payment for products due to environmental concerns, this started the May 2021 bearish leg. crypto market crashed.

You may have missed

NFT sales aim for a $17.7B record in 2021: Report by Cointelegraph Research